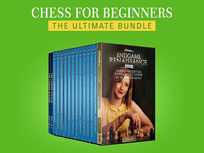 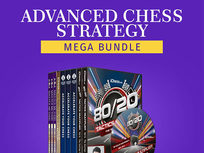 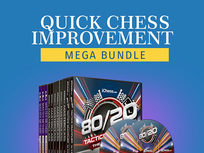 Learn the Best Strategies to Improve Your Chess Moves & Tactics

Are you looking to inject some fire into your chess openings, middlegame, and endgames, so you steamroll your opponents and get explosive Elo gain? This 44-hour mega bundle of chess strategies for beginners covers all the main pain points a chess player rated below 1800Elo faces daily and helps you fix them, improving your chess understanding and overall game. Chess masters Damian Lemos, Alisa Melekhina, and Anna Rudolf bring you 13 courses that will teach you secret tactics on playing middlegames, endgames, as well as playing your defenses.

GM Damian Lemos is a grandmaster from Argentina who has reached a rating of 2559 Elo. Damian Lemos was no stranger to success from an early age, achieving the FIDE Master title at only 14 years old, International Master at 15, and Grandmaster at 18. In his lessons, Damian works closely with students to first identify the flaws and weaknesses in their games so that they can be properly evaluated and corrected. By developing specifically-tailored training regimens for every one of his students, Grandmaster Lemos is able to achieve results that other chess coaches dream of.

FIDE Master Alisa Melekhina is one of the top female chess players in the United States. Her peak rating is 2302 Elo and she is also a frequent contender in the U.S. Women’s Chess Championship. Her instructional videos include topics on the c3 Sicilian, Advanced French, King’s Indian Defense, Fighting in the Endgame, Power of the Double Rooks, and Defeating Drawish Players.

Anna Rudolf is an Olympic Chess-Player and three-time Hungarian Champion currently rated 2325 Elo. She has been able to accomplish the titles of International Master and Woman Grand Master. She recorded her first video series in 2013 and since then, she has established herself as an acclaimed chess commentator, events streamer, and chess reporter. Anna has participated as a commenter in many world-class events including the World Chess Rapid and Blitz Championships in Doha, the Paris and Leuven legs of the Grand Chess Tour, the 2016 Candidates Tournament, and the 42nd Chess Olympiad in Baku.

This mega bundle contains 44+ hours of advanced chess strategy lessons from four of the best chess players and presenters in the world: GM Niclas Huschenbeth, GM Simon Williams, GM Judit Polgar, and IM Nazi Paikidze. This collection of premium chess lessons is designed to elevate your chess understanding and thought processes to the master level, covering everything from sacrifices and forcing moves to prophylaxis, pattern recognition, openings, and endgames. This is all about turbocharging your improvement with super-rich examples that will light up the shadowy areas of your chess understanding.

GM Simon Williams (aka Ginger GM) is an English chess grandmaster, author, and commentator. He obtained Grandmaster the Grandmaster title 2008, by accomplishing the final norm at the Hastings International Chess Congress 2005/2006 and the 2500+ rating at Hastings 2007/2008. His highest rating so far is 2550, achieved in November 2009. In 2009, he organized the Big Slick International in Purley, London, which comprised an invitational GM tournament and FIDE Rated Open.

Judit Polgár is a Hungarian chess grandmaster and also the strongest female chess player of all time. She achieved the title of Grandmaster at the age of 15 years and 4 months, at the time the youngest GM ever, breaking the record previously established by former World Champion Bobby Fischer.

Niclas Huschenbeth is a talented German chess grandmaster. Huschenbeth obtained his grandmaster title in 2012. He has played both sides of the Najdorf for many years. When asked what his favorite openings are for White and Black, he simply responded, “The Najdorf!” His most notable success to date was becoming the youngest German champion ever, at the age of 18, in 2010. He also represented Germany at the Chess Olympiads of 2008 and 2010.

How bright will your chess future be after 49 hours of chess coaching from Simon Williams, Lawrence Trent, Damian Lemos, and Marian Petrov, arguably 4 of the greatest chess teachers on the planet? This course put together the ultimate chess improvement program for intermediate players. The whole point of these lessons is to transfer the skills and knowledge of the masters to you — closing that gap without having to spend 1000s of hours of painstaking trial-and-error to get there. It's time to invest in yourself, take the path that thousands have taken, and transform your chess career into greatness.

GM Simon Williams (aka GingerGM) is an English chess grandmaster, author, and commentator. He obtained the Grandmaster title in 2008, by achieving his final norm at the Hastings International Chess Congress 2005/2006 and hitting a 2500+ Elo rating at Hastings 2007/2008.

Lawrence Trent is an English International Chess Master, trainer, and commentator. He has represented England in numerous international youth championships (including a 7th place in the U18 WCh in 2003). IM Trent has also demonstrated his ability as a commentator for major FIDE tournaments, and he has also host-commentated for independent super-tournaments, including the London Chess Classic.

GM Damian Lemos (2522, peak rating 2559 September 2009) was no stranger to success at an early age, achieving the FIDE Master title at 14 years old, International Master at 15, and Grandmaster at 18. He is a former Pan-American Junior Champion.

GM Marian Petrov is an accomplished professional chess coach, theorist, and Bulgarian champion in 2002 and 2017, as well as the winner of many open tournaments around the world. He is a FIDE trainer and was the coach of the team of Wales at the Olympiad in Baku in 2016. He graduated from the National Sports Academy in Sofia, Bulgaria with a Bachelor’s degree in Chess Pedagogy, a four-year undergraduate program designed to prepare top-level chess trainers.