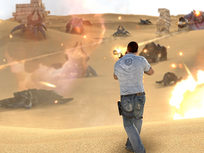 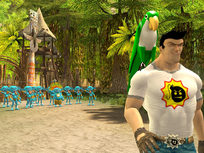 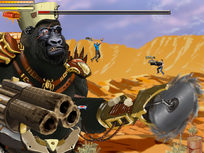 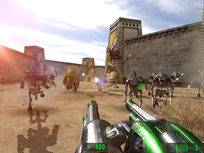 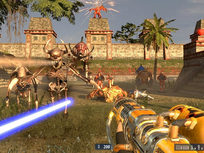 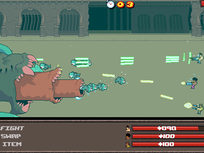 Serious Sam 3: BFE is a first-person action shooter, a glorious throwback to the golden age of first-person shooters where men were men, cover was for amateurs and pulling the trigger made things go boom. Bonus 1Comes with the BFE Bonus pack which includes the original soundtrack, documentary video, digital artbook, box art, posters and videos. Bonus 2Also comes with the Jewel Of The Nile extra campaign which includes three new massive missions set against a mysterious island, treacherous canyons, and ancient temples, a new giant boss and more destructive weapons!

The iconic Serious Sam brings his trademark relentless intensity to this bigger, bolder, more colorful sequel to the classic Serious Sam: First and Second Encounters! Tasked with rescuing the universe against overwhelming hordes of time traveling enemies, Serious Sam must battle through thick jungles, murky swamps, frozen tundra, and futuristic cities to bring down Mental and his vile armies one bullet at a time. Serious Sam 2 is a shot of adrenaline to the hearts of first-person shooter fans across the world. This is serious!

“Sam II's wild, random charm makes for a twisted Duke Nukem meets Alice in Wonderland sort of roller coaster ride-a perfect change of pace from the scads of grim 'n' gritty shooters steeped in WWII war zones and dystopian post apocalyptic futures.” (A) – 1UP “Croteam has succeeded on all fronts delivering a sequel that lives up to our steep expectations.” (8.5/10) – Worth Playing “Fans of old school shooters will definitely find the challenge and excitement level are very high here.” (8.2/10) – IGN

Serious Sam explodes into the second dimension using everything in his arsenal to battle the abominable legions of Mental’s horde. Pull the trigger to let the heavy ordinance fly in Serious Sam Double D XXL, a completely reloaded version of the indie sensation Serious Sam Double D with all-new missions, weapons, enemies, and challenges. Pile on the firepower with the revolutionary Gunstacker and fire all your weapons at once in a symphony of destruction! All that stands between victory and annihilation is a man in a T-shirt and jeans wielding a great big pile of guns.

“Mommy's Best Games' 2D shooter is fun the whole way through.” (7/10) – IGN “Easily the most insane and downright fun 2D shooter I've played all year, if not ever.” (85/100) – Strategy Informer “There's quite a lot of cathartic fun to be had with such a reckless onslaught of bullet-flavored justice” (7/10) – Destructoid “Check your brain at the door, kick back, relax and enjoy a little carnage. It's worth it. Seriously.” (8/10) – Worth Playing

Serious Sam is a high-adrenaline arcade-action shooter heavily focused on frantic arcade-style single player action. In a world where cyberpunk meets fantasy-fiction and advanced technology is mixed with black magic and psycho-powers. Sam travels through the beautiful world of ancient Egypt along with several diverse planets, confronting countless hordes of minions on his way to take down Mental himself. This pack also comes with the classic version of Serious Sam: The First Encounter.

Serious Sam: The Second Encounter is the second installment from the original First Encounter. It is a high-adrenaline arcade-action shooter heavily focused on frantic arcade-style single player action. In a world where cyberpunk meets fantasy-fiction and advanced technology is mixed with black magic and psycho-powers, Sam travels through the beautiful world of ancient Egypt and several diverse planets, confronting countless Mental's minions on his way to the Mental's base. This pack also comes with the classic version and Legend Of The Beast DLC!

The legendary Serious Sam reloads and rearms in an explosive, turn-based RPG developed by indie developer Vlambeer (Super Crate Box, Ridiculous Fishing). Serious Sam: The Random Encounter follows Sam and his band of oddball mercenaries as they battle across a pixilated world teeming chaotic battles, hordes of bizarre creatures, and mysterious secrets. Choose your weapons and take aim at the most random Serious Sam adventure yet!