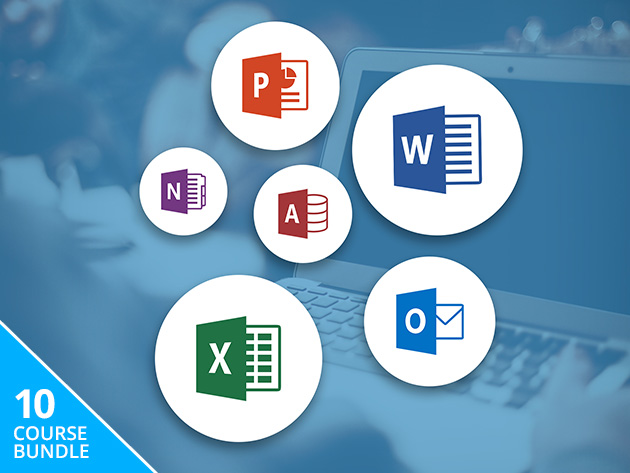 Microsoft Office has been a staple in the digital workplace for decades, yet it's common to dismiss it as a skill on our resumes, as Glassdoor notes, “Microsoft Office is not a skill. It’s a given.” We have almost adopted a cavalier attitude toward it, but how much does the average user know about Microsoft Office on an in-depth level? A basic understanding is a requirement for now, but the U.S workforce is expanding its digital knowledge at a rapid pace. According to CBS, “More than 32 million U.S. workers had jobs requiring a high level of digital skills last year.”

So how can you stay current with a constantly evolving workforce? Start by mastering the skills that employers expect you to be equipped with and use them to further your career. Pay What You Want: The A to Z Microsoft Office Training Bundle takes you through 10 courses to master all of the essential Microsoft Office programs. Here’s a breakdown of what you can expect to learn from each program + why it's valuable in the workplace.

Excel’s universal software is perhaps the most crucial program used in the digital working age. According to a new report from the Brookings Institute, “Between 2002 and 2016, the shares of U.S. jobs that require substantial digital knowledge rose rapidly, which suggests the urgency of adding a new, less-glamorous focus on the basics such as Microsoft Excel.” That being said, the training bundle offers two courses in Excel, one basic and one advanced. You’ll learn how to optimize spreadsheets, analyze data, create pivot tables, work with text, and use data functions.

It’s quite likely that you’ve used the premier writing program at least once before, but there are many functions of Word that the average user neglects. For example, how to use track changes to edit documents, convert text into tables and convert tables into forms. If you still need to go over the basics of Word, there’s a course for that too. It provides an introduction to text formatting, page modification, and using pictures and diagrams. So no matter your prior training with Word, you’ll end up mastering all its functions and features.

Since many companies use Microsoft Outlook as their primary email and messaging platform, it’ll benefit you to get acquainted with the ins and outs of its software. Outlook is used for more than just creating and sending emails, as it also allows you to perform organizational tasks, like managing schedules and creating meetings and tasks. This can be highly beneficial for entry-level positions, where you’ll be responsible for tracking and handling management’s schedules.

You may have already become acquainted with Powerpoint in an educational setting, but its relevancy doesn’t stop after you graduate. The training bundle dedicates two courses to Powerpoint, a basic course that teaches you when and how to use it + a more advanced course, to help you create meaningful presentations that will increase your value as an employee.

If there’s one thing company's value, it’s data. If you’re an aspiring software developer or data architect, Microsoft Access will be especially useful. However, it can also serve as an excellent data organizer for the more casual user as well. Over the course, you’ll explore the four main objects of Access, which include tables, queries, forms, and reports. You’ll also learn to link to external data sources and understand how to customize Access tools depending on the scenario.

Though OneNote may have gotten off to a slow start, TechTarget now calls it a more modern approach to content and collaboration that is likely to continue winning loyal users for years to come. If you’re not familiar, OneNote is a digital notebook that allows you to consolidate and save your notes in a single, easy to navigate location. During the course, you’ll learn how to add content to OneNote, customize the interface, and share your notebook.

With 58 hours of content, 313 lessons and lifetime access, a training bundle of this extent is normally valued at $1,590. Fortunately, you can pay what you want. Yes, you read that right. For a limited time, pay any price you want, starting at $1 and you’ll take home two of the included courses. If you beat the average price (currently around $15), you’ll get access to the entire 10-course bundle. So whether you’re a Microsoft newbie or just need to brush up on your skills, you’ll gain the knowledge necessary to be a well-rounded candidate and successful employee.

How to Use a VPN: A Primer on Virtual Private Networks

Grilling Gear to Help You Make the Most of Barbecue Season

The Hiking Gear You Need for Short and Long Hikes

Meet the Bath Mat of the Future

Father's Day Present Ideas From Us to You & Yours

20 Father's Day Gifts for Every Kind of Dad

12 Trending Tech Deals to Enhance Your Hobbies, Productivity, and Career